I have now completed my second, junior fiction novel, Molly Gumnut Rescues a Bandicoot. It's aimed at confident readers aged eight to eleven.  In this story, Molly rescues a young bandicoot from the claws of her neighbour’s cat. Of course, nothing ever runs smoothly with Molly, and I never know how a book will end until I write the last chapter. I have it in my head, but Molly always controls my endings.

The inspiration for this story came when I cared for a little bandicoot that was attacked by a cat. I named him Furble and with the fantastic training I’ve been given by FAWNA (wild life rescue) I was able to bring him back to health and release him back to his family in the bush. It was an experience I’ll always treasure and I hope Furble’s experience is read by many. I also hope this story will encourage people to keep their cats in at dusk and dawn. That’s when these little critters are out and about.

Furble is one of the sweetest little critters I’ve ever seen. He will remain in my heart forever. I hope you all enjoy the photos and videos of Furble and I hope that Furble is enjoying the rest of his life. (Link to FAWNA (For Australian Wildlife Needing Aid) http://www.fawna.org.au/courses.html 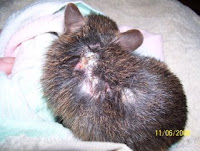 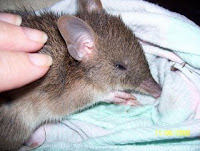 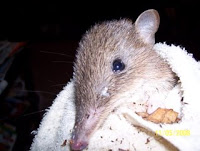 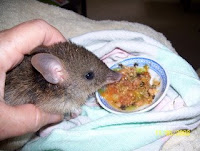 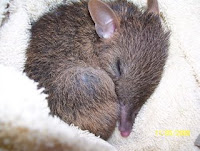 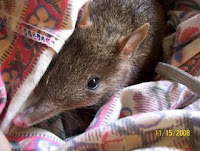 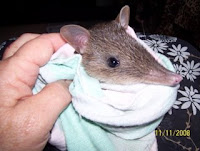 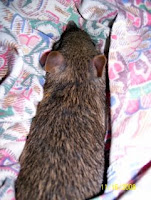 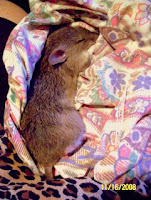 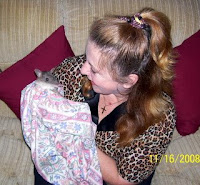 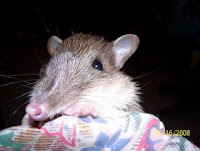 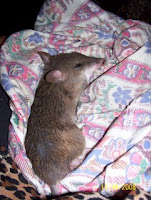 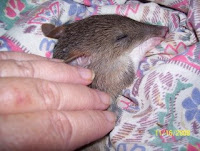 Posted by Unknown at 8:18 PM 6 comments: Links to this post

Labels: Furble the bandicoot in Molly Gumnut Rescues a Bandicoot. 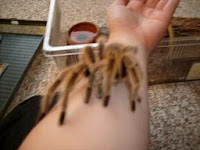 Tonight I’m going to welcome another writer and animal lover, Holly Hook. She’s going to talk about her writing and her pet Tarantulas.

Welcome to my blog, Holly. What are you working on at the moment?


Right now I'm working on an upper middle grade/young adult series titled Reta Morse. I'm planning on five books. In the first, Reta Morse and the Sinister Shadow, fourteen-year-old Reta is infuriated when her favorite cousin bans everyone under 18 from the local hangout for no apparent reason. When she, and her friends resort to pranks to get revenge, mysterious shadow people from another world stalk her. She later learns that these people are part of an organization called the Shadow Regime, a group of immortals that oversees and controls all forms of discrimination based on age. With the help of some human helpers, they have gained control over Jerry and forced him to work for them.

The Regime's powerful leader, A. Gist, seems to be after Reta specifically, as if the two have met before. Reta gets other teens to lobby against Jerry, which may free him from the Regime's control. When this happens, A. Gist gets fed up and decides to take Reta to his own dimension for an unknown, sinister purpose. As he and his minions close in from all sides, she must use extreme measures to escape his grasp.

I have also almost completed the first draft of the second book, Reta Morse and the Treacherous Traitor.

I know that you’re a writer and you love animals, but is it true that you keep tarantulas for pets?


Yes. Right now, I have 25 of them. Several are full-grown adults but most are babies in varying sizes.

Tell us more about them and how they inspire your writing.

I always like things that aren't conventional, hence the tarantulas. I couldn't resist slipping one of my pets into the first Reta Morse book. In this book, Reta has a mean Biology teacher named Mr. Gorfel who happens to keep a tarantula in his classroom as well. When I got a spider that looked like his, I named her Suzie, after the tarantula in the story.

Most people think tarantulas are all black and hairy. While some are, they actually come in every color of the rainbow. I've got a few orange and black ones, one that's black with a red butt, a bronze one, one with white stripes on the legs, one with a shiny pink head, one with bright pink feet, one with gray zigzaggy patterns, one that's red, purple, and green, and even one that's metallic blue all over if it's held in the right light.

Oh, yeah. I also have one that's black and hairy.

It depends on the tarantula. Some species, like the Rose Hair and the Mexican Red Knee (Suzie) I can pick up and hold with no problems. I even have one (A Mexican Red Leg) that will just sit there and let me pet it. Also, my Pink Toe and my Curly Hair are easily handleable too. In my opinion, they're safer to handle than hamsters (and far less likely to bite you.) I've never been bitten by a tarantula. In fact, there are no recorded deaths from tarantula bites anywhere in the world. There are a few species that can give you some unpleasant symptoms but most tarantula bites just result in some puncture wounds and some pain around the area.

As for my Sunburst Baboon and my Cobalt Blue...I have a 10 inch pair of tongs that I use so I don't have to stick my hand into their tanks. Any tarantula from Africa or Asia has an attitude problem and shouldn't be handled unless you want to be bitten. They're display pets only. Tarantulas from the New World (North and South America) tend to be mellower, though some aggressive types do exist there too. New World tarantulas do have a drawback, though. Most of them have irritating hairs on their butts that they can kick at predators. I've had hair kicked at me lots of times but luckily I seem to be quite resistant to the effects.


Do they communicate with you?

Oh, I would love to see that. Tell me, how much time each day do you spend with them?

I always check them before and after work to make sure they have water. When it's time to feed them crickets (and that only comes once a week) I'll take a full hour to get through them all. Tarantulas only need to eat one or two crickets a week at the most; they have very slow metabolisms. Tarantulas involve slightly more maintenance than rocks.

I hope to have many of mine for decades. In some species, like the Mexican Red Knee and Mexican Red Leg, the females can live up to 30 years or more. Both of my specimens are still babies and one I know is a female. In other species the females may only live 12 or 15 years or so. Males, however, die within two years of becoming adults.

Do you ever have to take them to a vet?


If I took one to the vet, they'd probably scream. I don't know of any vets that will see them, so if one gets sick, you're on your own. Just recently, Suzie, my Mexican Red Knee, had a complication with shedding her skin. (All spiders shed their skin periodically to grow.) Two of her legs got stuck in the old skin and were being dragged under her, and they got all mangled and injured. Later that night I had to grab onto one of her injured legs and help her pull it right off. Luckily it came off cleanly. The other leg is dried up and ready to come off as well, but the good news is that tarantulas can withstand losing a leg or two and even have a mechanism for detaching them if things get bad. Then, as the tarantula continues to grow, the missing legs grow back. If she makes it through her next molt she'll probably be fully intact again by time she's an adult.

I was lucky, though. Bad molts are a top cause of death in tarantulas.

Thank you so much, Holly. That was fantastic information. It will probably help some other writers too. I will look at tarantulas in a different light from now on. I never knew they could live so long. That’s amazing.
Good luck with your book Reta Morse and The Sinister Shadow, Holly, and I hope one day you write a whole book about tarantulas.


Thank you very much, Trish, for interviewing me. It's not often I get a response to my tarantulas other than "Ewww, a spider!"!
Posted by Unknown at 6:00 AM 2 comments: Links to this post

Save a Guinea pig. 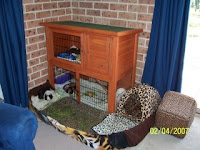 Boofhead having his weigh in 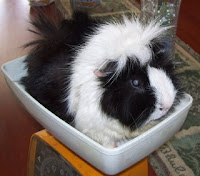 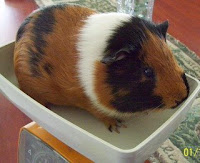 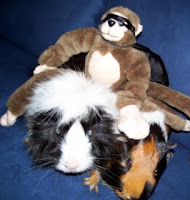 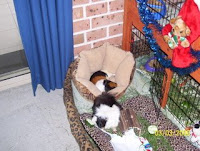 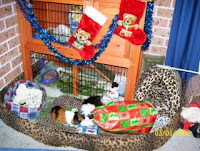 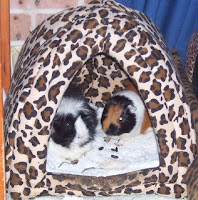 Having a guinea pig in your life can be one of the most wonderful experiences. It is for me. They're adorable, funny and entertaining little animals, but they do need lots of special care and love. Personally, I wouldn't house a guinea pig outside. My little boars are kept indoors where they're safe from predators like eagles, snakes and other animals. If you do decide to house guinea pigs outside, make sure that the cage is snake proofed and warm in winter. In the summer, makes sure they are kept cool and not in direct sunshine. Guinea Pigs can die from temperature extremes, and also from frights from barking dogs.
Check them on a regular basis to make sure they haven't hurt themselves. They have to be weighed regularly to make sure that they are eating properly. If their weight starts to drop, it could be because they have a health problem and need to go to the vet. Don't be fooled if a guinea pig pretends to eat. They do this sometimes to fool their mates that they aren't sick. They may toss food around or dip their head in the food bowl and pretend to eat. I've had guinea pigs do this when they need to get their molars (Teeth) checked.

Also check for ticks, lice and mites and make sure their toenails are cut regularly. Make sure there are no pieces of hay stuck in funny places too.
If you would like to save a guinea pig, you can adopt from one of the rescues around the world. There are many guinea pig rescues on the internet. Here in Australia you can adopt a guinea pig from The RSPCA. Here is the link: http://www.rspca.org.au/ You can view on line what animals are available.
If you need to take your guinea pigs to a vet, make sure they are experienced with guinea pigs. Some are not.
If you need specialized care for your guinea pigs, there are exotics vets available all over the world. Here in NSW Australia there is a wonderful exotics vet in Crows Nest Sydney. Here is the link: http://www.davidvella.com.au/ (There are also some great links on the David Vella web site.)
You can also check for guinea pig vets on the RCPCA web site: http://www.rspca.org.au/


Posted by Unknown at 6:18 PM 2 comments: Links to this post 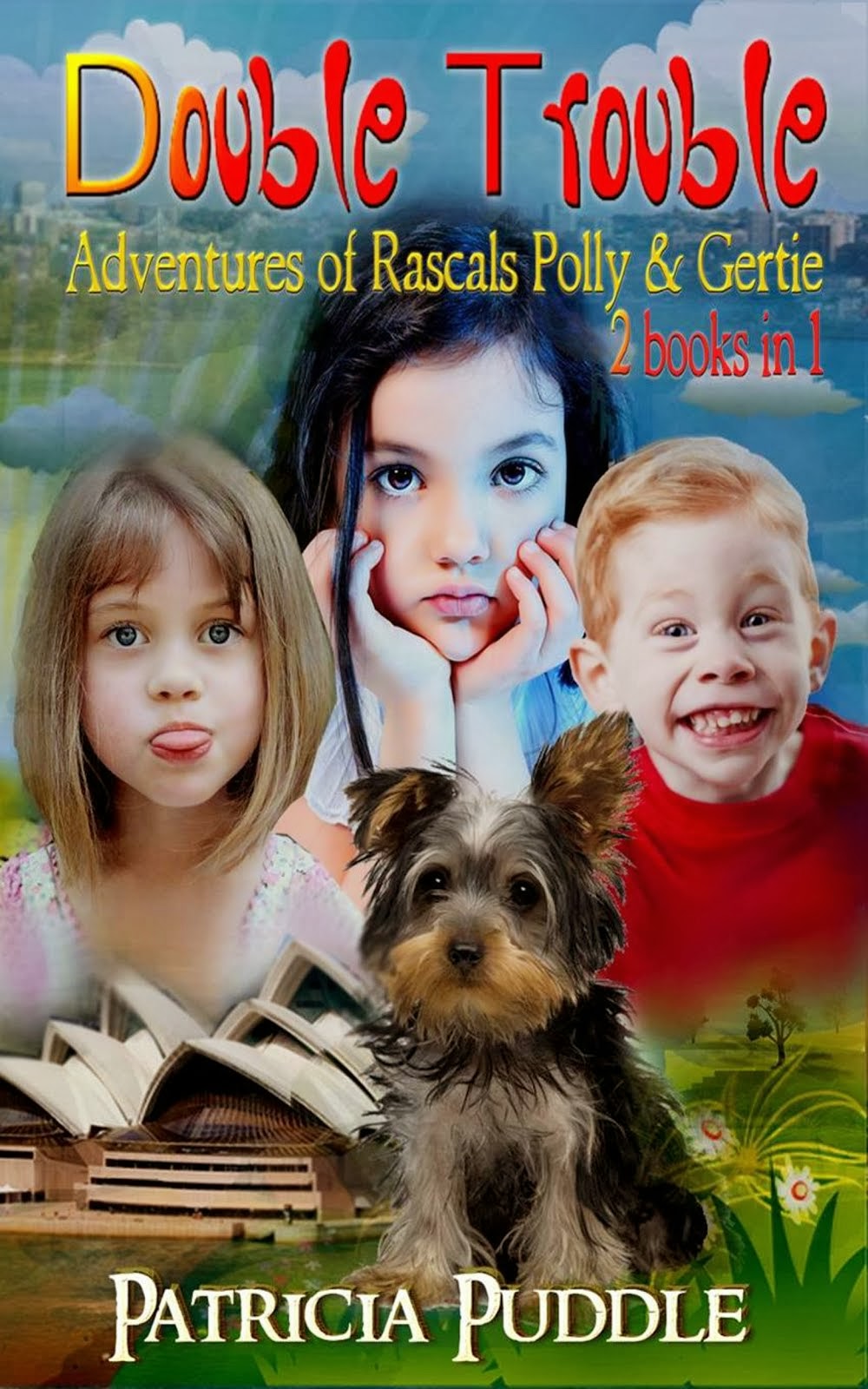 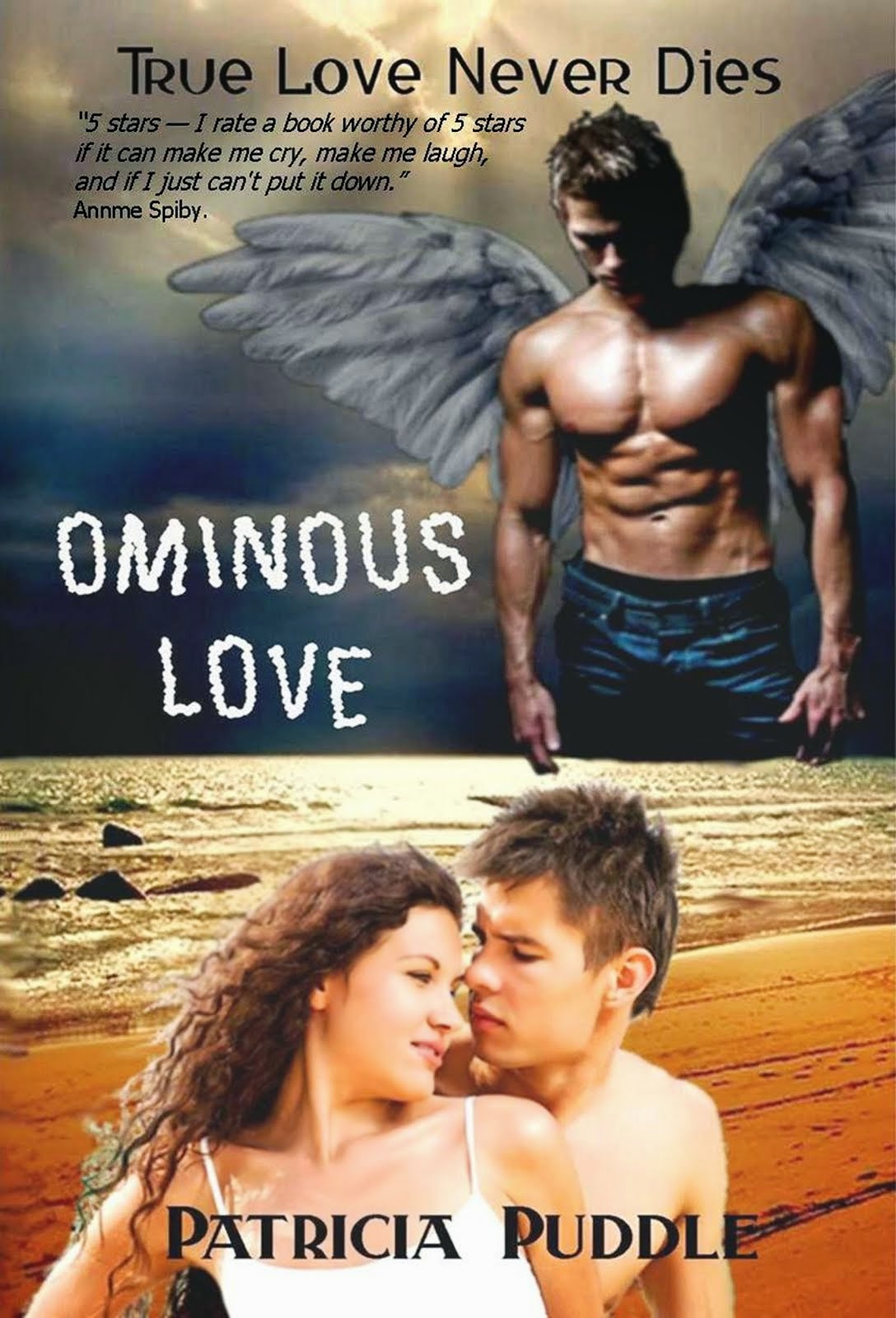 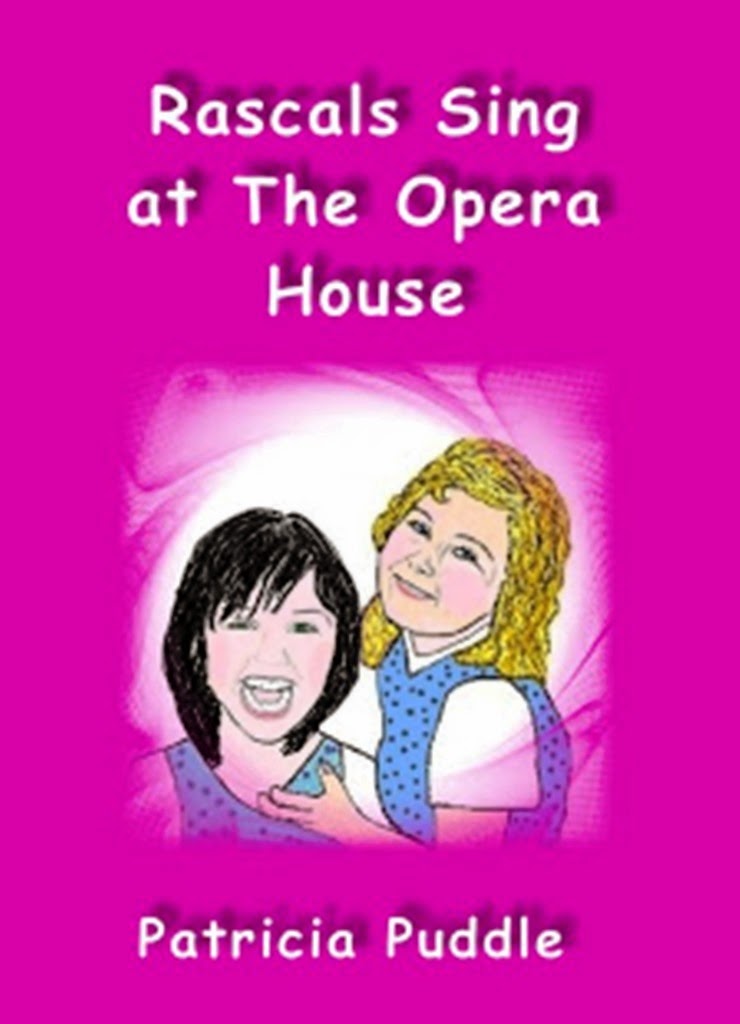 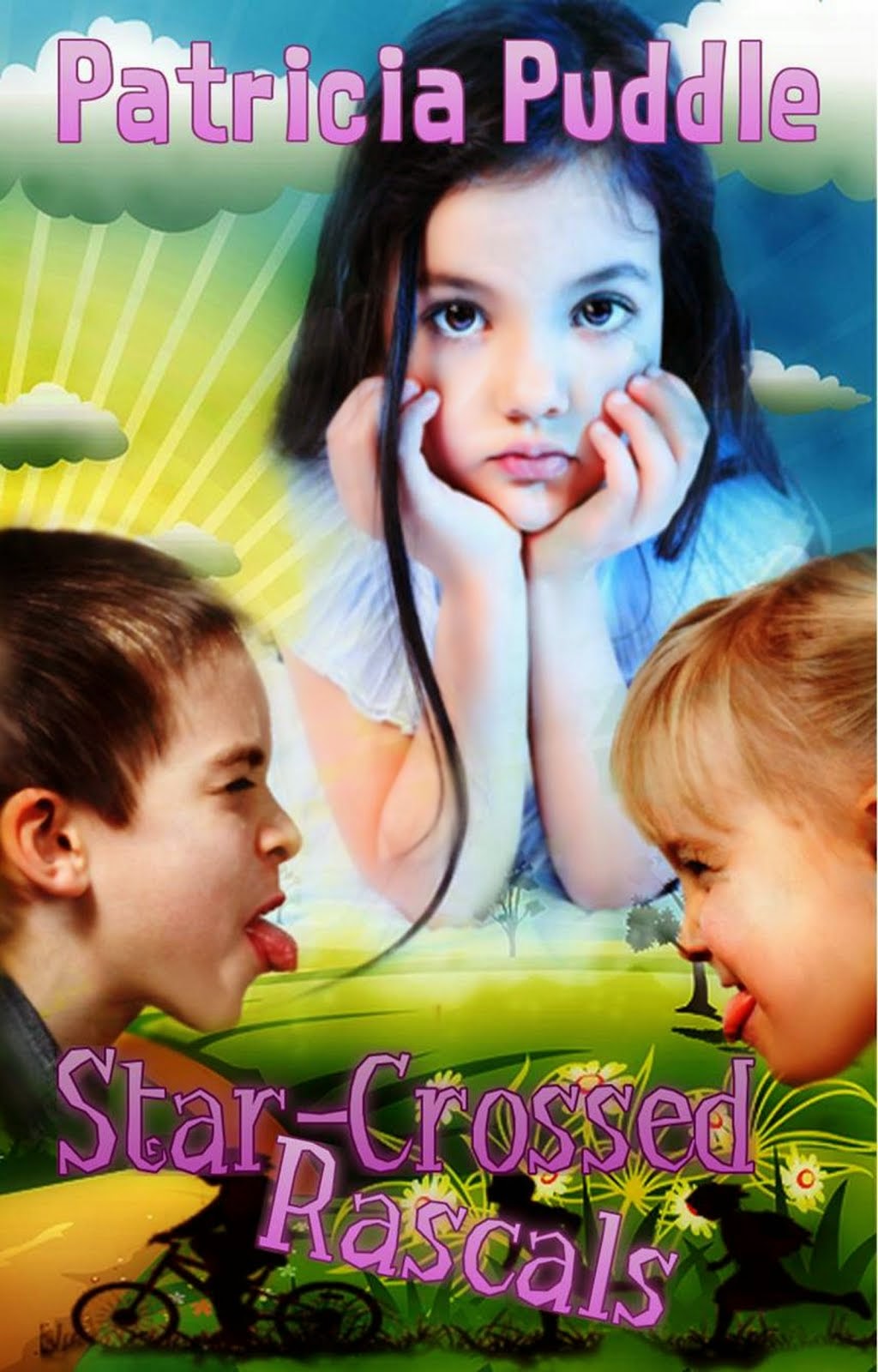 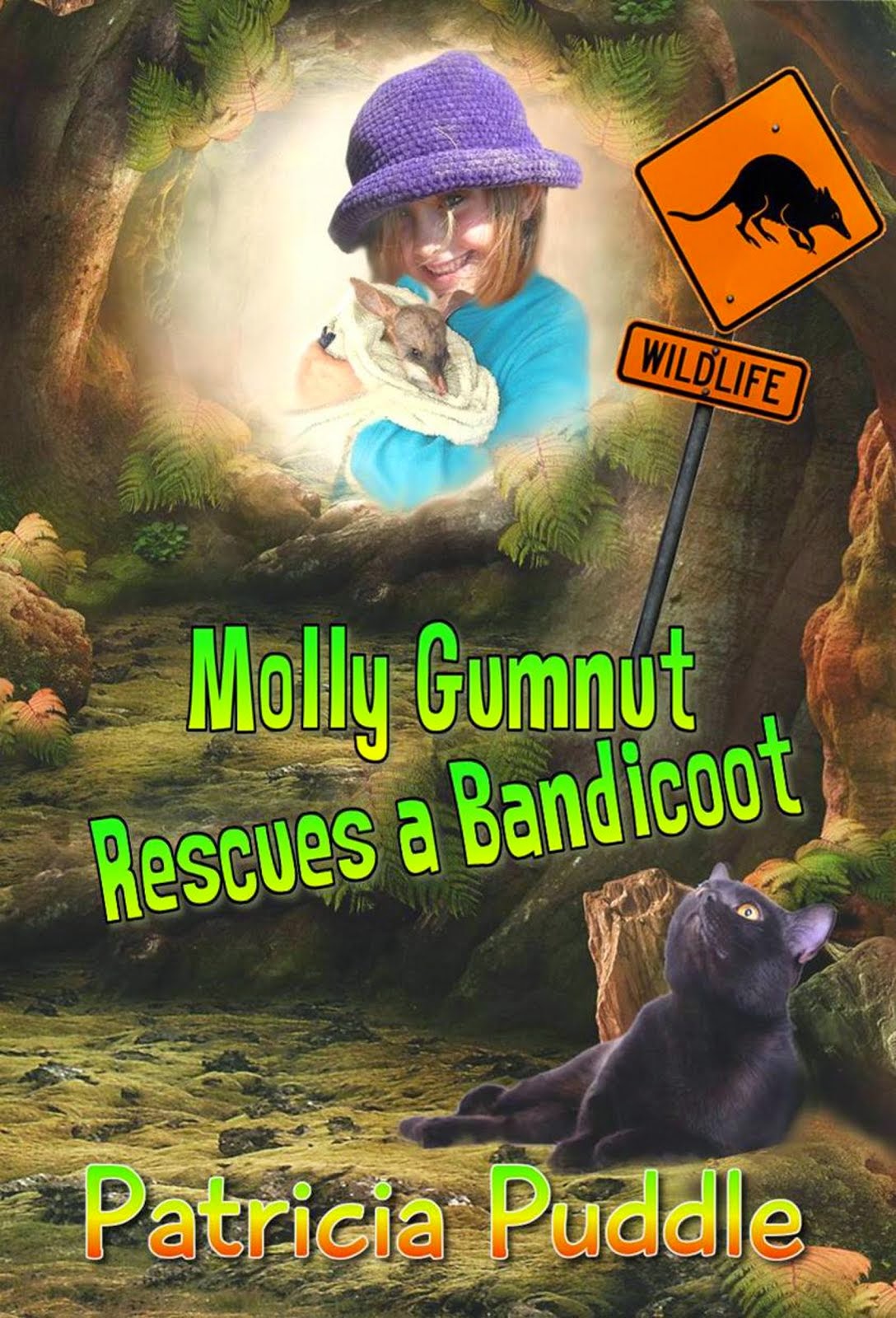 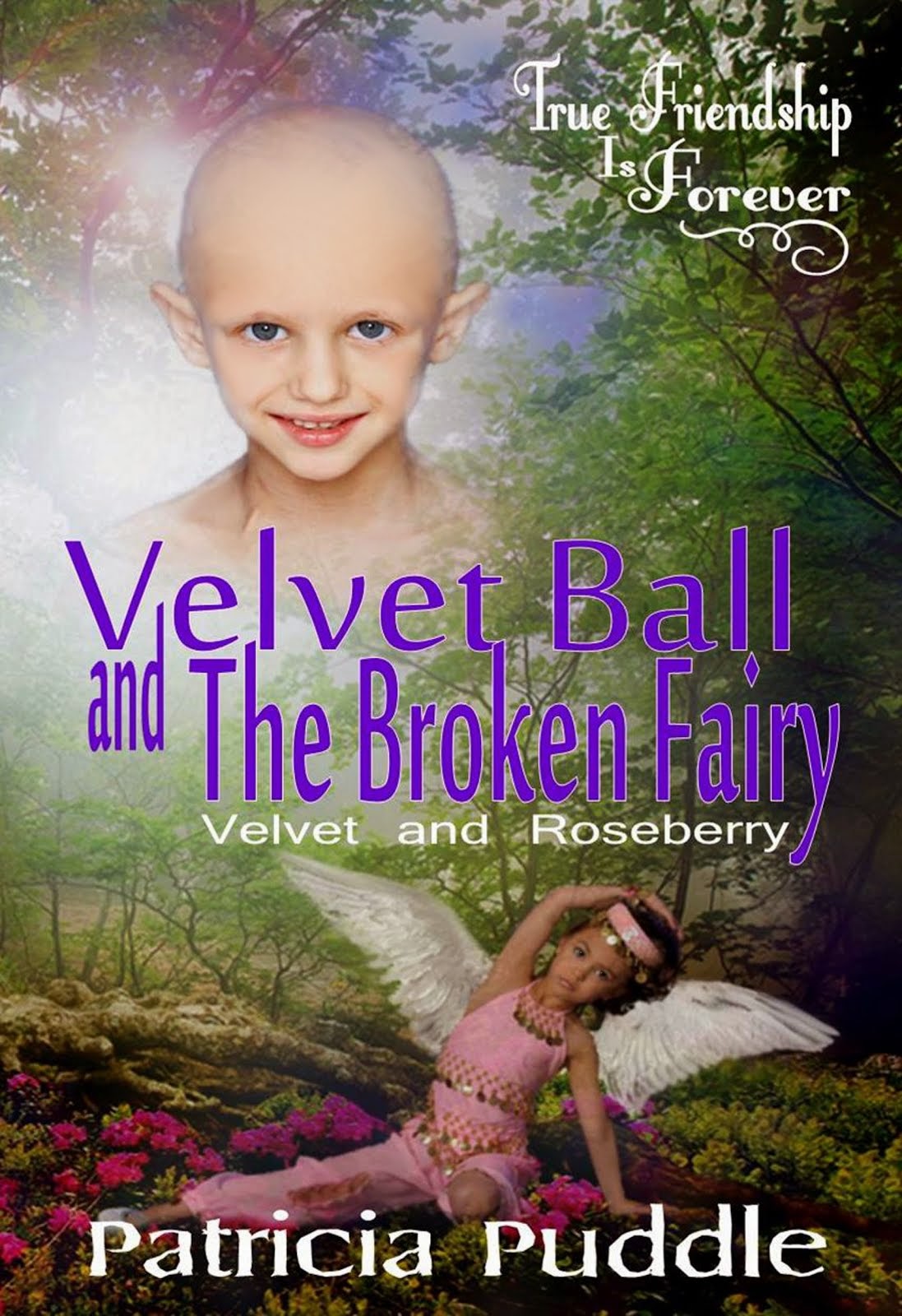 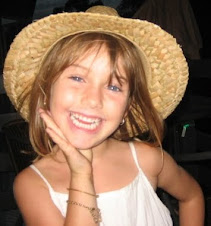